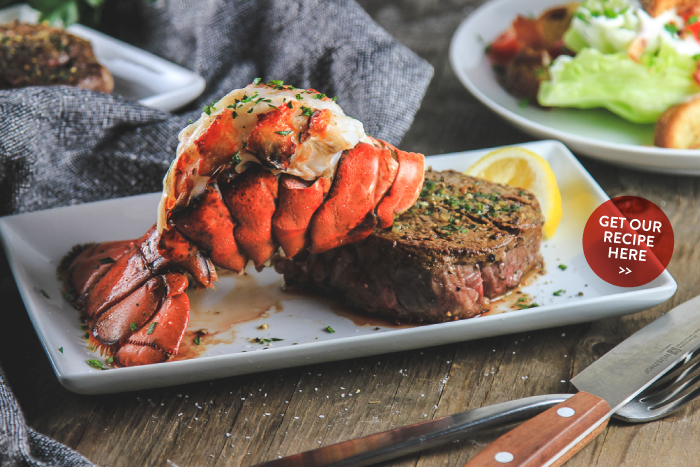 A surf and turf dinner for two guarantees a successful date-night-in on Valentine's Day! Easier to make than you’d think, the primary effort involves prepping the lobster tail -- and that’s not all that difficult! Once the tails are ready, place them in the oven as you sear the steaks. Once the steaks are seared - also add them to the oven and let the heat finish the job in just a few minutes. What a lovely dinner for two!

Lobster Directions:
1. Prepare the lobster tails. Use kitchen shears to cut along the top of each shell in a line down the middle stopping just before you reach the flat part of the tail.

2. Turn the lobster over, and cut off the small legs underneath the tail. This will help when trying to release the meat from the shell in the next step.

3. Using a spoon, loosen the meat from inside the shell, and place on top of the shell. The meat will still be attached at the tail's end. Placing on the shell will help to prop up the meat as it is baked and served.

4. If there isn’t already a score in the tail's meat, cut a shallow slit along the top of the lobster meat. Remove the vein from inside the meat if present.

5. Brush the lobster with the melted butter and sprinkle with salt.

6. Bake at 400 degrees F for 10-12 minutes, or until the meat has turned an opaque white and the shell becomes bright red.

7. Garnish with a lemon wedge and fresh parsley.

Steak Directions:
1. Remove steaks from the refrigerator 30 minutes before cooking. Season with a generous sprinkling of kosher salt and freshly ground black pepper on all sides.

2. Preheat the oven to 400 degrees F (if not already hot from roasting the lobster tails.)

3. Heat the olive oil and butter in a cast iron skillet until sizzling hot.

4. Sear the steaks on each side for 2 minutes until a crust forms.

5. Place the seared steaks in the oven and cook for 4-5 minutes, or until the center reaches 125 degrees for Rare or 130 degrees F for medium.

6. Let the steaks rest for 5-10 minutes before serving. Toque Blanche is on TikTok!